BERRY CREEK, Butte County — When Ira Payne reached the green suspension bridge over Lake Oroville at about 1:30 a.m. Wednesday, the hill beside it was in flames and an overturned car was blocking the only road out.

Payne and his neighbor doubled back to a boat dock along the lake, with a line of cars and two fire trucks behind them. For an agonizing half-hour, about 100 people could do nothing. It was pitch black. They couldn’t see the fire, but they could smell it burning.

“Right there was probably the most nerve-wracking,” Payne said. “Basically hell.”

Once firefighters cleared the flipped car from the road, the residents raced down the mountain and across the bridge, which was ablaze in orange flames. But in the massive, fast-moving inferno of the North Complex that exploded that night, not everyone made it out. The Butte County Sheriff’s Office confirmed Saturday evening that 12 people had died, with two identified from Berry Creek.

Their deaths were the result of a confluence of factors, said residents who fled and family members who lost loved ones. Strong winds pushed the fire, which had been burning for three weeks north of Berry Creek, straight toward the town, leaving little chance for warning. Pacific Gas and Electric Co. had shut off power Monday night, a planned outage to prevent wildfires, leaving some residents without TV or internet in an area where cell phone service is hit or miss. And in the fire-weary community, some residents shrugged off the evacuation orders they receive every year.

“This is one of the fires where there was no warning,” said Zygy Roe-Zurz, whose 77-year-old aunt died near her car, trying to escape. On Saturday, he was still waiting for word of his uncle and mother, who also lived there and were missing. He wasn’t hopeful. 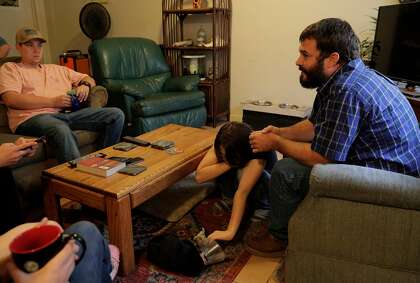 “The power was out. The major means of communication wasn’t available to them. All these things came together to create this tragedy,” he said. “It’s really, really unfortunate and I’m really sad.”

Berry Creek, a town of around 3,000, drew people looking to escape into the mountains, to raise their kids in peace and quiet, or to pay less to live. The town had a small school with about 50 kids up to eighth grade, and a handful of businesses. In the past few years, evacuation orders have annually driven residents out of their homes, with fires devastating nearby areas but never quite reaching Berry Creek.

This year was different. As soon as Cal Fire sent word of the imminent danger, Butte County Sheriff Kory Honea sent out an evacuation warning to the town around 3 p.m. Tuesday, and then an order 45 minutes later.

“As soon as we understood the gravity of the situation from our counterparts in the fire service, we issued evacuation orders utilizing multiple ways and methods including sending deputies up into those areas, and got that evacuation going,” Honea said Friday.

Some residents left immediately. Others, lulled into complacency from their past experiences, didn’t. Still others said the lack of communication services left them in the dark about the risks, with some but not all residents receiving push alert notifications to evacuate on their cell phones. Payne said he never got an alert: The same day, his sister tried to call him for three hours, with no answer.

Samantha Jarrell, who lived in Berry Creek for 9½ years, did get a warning on her phone to evacuate, but wasn’t worried. She left only after seeing the fire on the evening news three hours later, grabbing the family’s Social Security cards, birth certificates and tax papers. Her three kids packed three outfits and their favorite books. They all thought they would be back soon.

Samantha’s husband, Josh Jarrell, stayed behind to ride out the fire at their home on Sugar Pine Drive. But by 11 p.m., it started snowing ash. Embers flew through the air. The bottoms of his boots started to melt. 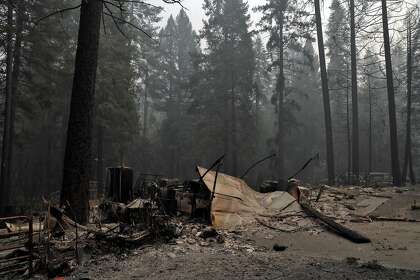 Jarrell, the last one on his road to leave, careened in his beat-up white truck to the Village Market, the only gas station and grocery store in Berry Creek. The owner and some residents were still in the parking lot.

He honked and yelled at them to get out as he took off. Driving down Oro Quincy Highway, the ash was so thick he had to use his windshield wipers.

He could hear propane tanks exploding. The tops of the trees were glowing and flames shot up on both sides of the winding road.

Just north of Berry Creek in Brush Creek, Chris Woolf knew he had to leave when he put his drone up in the sky and saw flames engulfing trees on three sides of his cabin. Within 15 minutes, he and his sister grabbed their three dogs and drove down the dirt road between walls of orange flames before screeching onto the highway and heading to Oroville.

Woolf, who lived in Brush Creek for nine years, had never followed evacuation orders, even when the Camp Fire, which burned through the town of Paradise in 2018, got within a quarter-mile of his home.

“Too many times the warning came out and we would ignore it,” he said. “Every year about this time there’s been a question of am I going to get burned out. This was the year it finally got me.”